This time (9/3) I went plein air painting at Park Hill Orchard in Easthampton, MA, bringing along some of my New England Watercolor Society colleagues. This was the first time I had organized one of NEWS's "Brushes With Nature" plein air outings. The orchard staff were delighted to have us and invited us back. Next year for sure!

Tuesday I went _plein air_ painting with the Cambridge Art Association at Cambridge (MA)'s Mount Auburn Cemetery. Thanks to session instructor Amanda Hawkins for the advice that really made this piece pop.

Looks like the rain is going to hold off until evening, so I'll see you this afternoon in the Charles River Speedway courtyard for a comics art demo! https://charlesriverspeedway.com/courtyard-event/speedway-grand-opening/

Potentially useful for any video creators out there still using youtube:

How to stop transphobic (or any far-right) ads from running on your channel | Council of Geeks
https://youtu.be/rg3WI4xRrwc

Yesterday I joined some folks from the New England Watercolor Society for one of their plein-air outings. We were on Boston's Esplanade, and I chose the Arthur Fiedler bust near the Hatch Shell.

I haven't done a lot of plein air the last few years, so I'm rusty and kind of unhappy with this, especially the sky and the foliage. The masking-fluid marker I used picks up any paint layers that had been previously laid down, so Dr. Fiedler has some white highlights where I didn't mean him to.

I've finally launched my Patreon -- come join me for sneak-peek and exclusive work-in-progress images and more related to my Cagliostro graphic novel, as well as commissioning opportunities. https://www.patreon.com/ejbarnes

Last 2 weeks for the New England Watercolor Society show I've got a piece in. It's in the NEWS Gallery at Plymouth Center for the Arts in downtown Plymouth, one block up the hill from Plymouth rock. "Works by Associate Members" closing 27 April. https://newenglandwatercolorsociety.org/Exhibitions_Entries/NEWS_Gallery.html#shows22

Tonight is the Zoom reception for Forms of Resistance, a juried exhibition of political art at Cambridge College in Charlestown, MA. I plan on attending the reception, which is 7--8 PM; Register here: https://us02web.zoom.us/meeting/register/tZckd-CqrzosHNZM5NEb76NOpwfBVr1vwJG1

My piece is "Coronavirus Firing Squad", with a gag by California artist Les Toil.

The trouble with fairy lights is that eventually metal fatigue breaks the circuit. 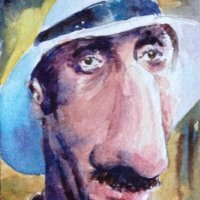 I'm tabling tomorrow (Sat.) in Starlight Square at Mini-MICE -- my first in-person con in over a year and a half! Just printed "The Artifact", reprinted "Arithmetic on the Frontier". Let MICE know you're going this weekend!
https://www.eventbrite.com/e/mini-mice-presented-by-the-massachusetts-independent-comics-expo-tickets-166161540641?utm-campaign=social&utm-content=attendeeshare&utm-medium=discovery&utm-term=listing&utm-source=cp&aff=escb

My 2020 ink/ink-wash cartoon "Do You Take Venmo?" is featured in the Cambridge Art Association's online summer Small Works Exhibit. The show may be viewed through 29 August. All items are for sale -- my piece is framed. Massachusetts sales tax is included in the price of all art.
#CambridgeArtAssociation #smallworks #cartoon #gagcartoon #inkwash #ink

i got one of the rare and lovely tables at this year's version of Massachusetts Independent Comics Expo -- Mini-MICE, outdoors in Starlight Square, Cambridge! I'll be there Saturday, 28 Aug. https://www.micexpo.org/mini-mice/

"Snowbird", the art for my 2019 holiday card will be showing in the New England Watercolor Society's "Works by Associate Members" exhibition, 5 March -- 28 April. (You can see my name on the accepted work list if you click on the link below the dates.) https://www.newenglandwatercolorsociety.org/Exhibitions_Entries/NEWS_Gallery.html#ASSOC

Come watch me this weekend on the all-online Arisia SF/F convention! My schedule is here: https://www.arisia.org/Bios#EJBarnes

Also, if you’re casting about for some non-family entertainment for Boxing Day this year, I’ll be giving a Zoom reading this Saturday at 9 PM of Blaster Al Ackerman’s only known Xmas story (a Ling story not yet adapted as comics), “Ling and the Leg of Arthur Godfrey’s Leg”. A Zoom link will be emailed to registrants earlier that day. Register at https://www.eventbrite.com/e/boxing-day-reading-of-blasters-ling-and-the-leg-of-arthur-godfreys-leg-tickets-132682034537

Blaster Al Ackerman would draw marker drawings of a famous person, living or dead -- only they always had too many eyes, with the caption, “Are You Drunk?”

One of Blaster’s former coworkers in Baltimore mentioned today on F*cebook that Rudy Giuliani’s star witness in the “election fraud” hearings in Michigan, Melissa Carone, appeared to be intoxicated, and that Blaster would have had a field day with her. I promised him an “’Are You Drunk?’“ riff on her. Here is is.