@greenCoder thanks! I'll be sure to draw something fresh soon. Right now i'm working a lot on the graphics tool itself.

@Monty i see what you did there! haha. thanks!

Scrolling GIF. NES displayable graphics. While the top (with the moon) is a scroll-split, a few of the lowest stars are sprites to make it seem as if the two strips of background are overlapping. (There are no background layers on the NES. This is one way to overcome that. ) 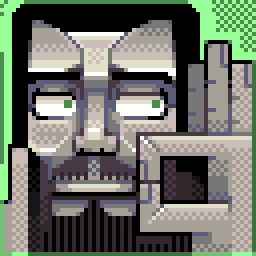 Another #PixelArt #portrait I wanted to add to Mastodon, called "Cherry Blossom."
I'll try the #MastoArt tag, too.
Added a content warning tag for eye contact, just so you know.

So many new follows! Thank you.

I have a backlog of works posted elsewhere to toot. Here goes..

@e4 may be, i think i get them instantly over on .art

@JordiGH Thanks for the mention <3

You asked me, @Byte, so I listed some cool folks to follow here:

@NovaSquirrel made Nova the Squirrel

My buddy @saadazim has dabbled in some NESdev too and is an all-around cool and funny guy.

A new update to a somewhat old stage piece.

Three NES screens wide scene. Meant as a relatively early stretch of a level in the game i still have to think up a title for, but which i simply call "borscht" until i know something better.

Overloads one of the four subpalettes as soon as the central abbey building is scrolled out of view, to make 2 extra colours possible by the right end.

@kandid @eishiya Twitter also ceased supporting APNG because it had some performance issues in their app on some phones.. otherwise, APNG would've been best for animated pixel art on that platform. No longer so. On mastodon, i haven't explored much yet.